I’ve recently finished a MOOC on ‘Online Games: Literature, New Media, and Narrative’, which ran from 9th September to 21st October from Vanderbilt University (via Coursera). This one had found its way into my list of courses not for particular career relevance or utility, but it had just piqued my interested because I am a bit of a fan of World of Warcraft (which, ironically, has been rather neglected since I started studying MOOCs in my spare time instead!). 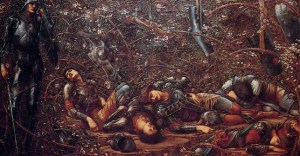 Anyway, it had been on my course list for ages and coincided with me being rather busy, but I thought I’d give the first week a go and see how it went. And I was hooked! The MMORPG in focus was not World of Warcraft, but Lord of the Rings Online. The course was quite diverse; using Tolkiens’ first Lord of the Rings book as a starting point and anchor throughout, the course explored game formats, media studies, pre-Raphaelite art, and Romance literature. It was fascinating, and I have no idea how I would be able to study such a unique topic if it wasn’t for this MOOC. I think, out of the broad range of topics included in the course, at its core the course was primarily an English Literature course. This is not something that I would necessarily go out of my way to study, but in combination with the other topics, was compelling. It was a powerful reminder of the value of MOOCs of being able to experience a wide range of subjects with no negative consequences if you discover that actually you aren’t so fond of a subject, and might discover you really enjoy something unexpected.

The fellowship of the MOOC

As well as the appeal of the topics covered by the course, there were two other things which made this course a winner for me. The instructor, Professor Jay Clayton, clearly loves the subject and his enthusiasm was infectious (even mediated by the internet!). The course contents were still delivered by video, but mainly used an approach which I’d not seen before in a MOOC. Rather than being lecture-like, most of the videos were based on more of a tutorial type format (see thumbnail), where Professor Clayton was joined by several graduate students in a discussion about the topic in focus. This format really worked for me; I found it to be much more engaging than just a lecture. The students brought their own examples which enhanced the discussion, and seeing the turns in discussion which led to a shared understanding was much more useful than simply being given one opinion. (At least that’s what it felt like to watch – it may have been completely staged for all I know!) Although it might not be to everyones’ taste, I found this kind of vicarious learning very valuable and it is something which I’d like to see more of. I’d be interested to hear about any other examples of approaches in MOOCs which have used video in innovative ways which do not simply replicate the lecture model – if you’ve experienced any other innovative approaches please do leave a comment 🙂