A quick look at gender differences in MOOCs

I’ve been having a bit of a Twitter chat today with @dkernohan and @meatyloafy about sources of data for MOOC student demographics, which led to wondering whether the percentages of female and male students in MOOC courses reflects gender differences in traditional university course subjects.

I’d pointed out that gender preferences vary according to course (using the examples of the six Edinburgh MOOCs, in their report here), and David suggested that HESA (the Higher Education Statistics Agency, which collects data about UK HE) could be a useful source for comparison.

So, using the six Edinburgh courses as examples of MOOCs, I had a quick go at mapping them on to their related HESA subject areas, and looking at the percentage of female and male students who had studied these fields in the most recent year (2009/2010, using students at all levels of Higher Education) for which data was available. The data for the MOOCs, and their related HESA subject areas, was as follows:

Source: MOOCs @ Edinburgh 2013 – Report 1 and HESA Table 7, Qualifications obtained by level, gender and subject. Click on the table to enlarge.

Raw data can be found in this Google Doc. I wasn’t 100% sure about categorising ‘Critical Thinking in Global Challenges’, but categorised this as Medicine on basis that the instructors are based in Biomedical Sciences. 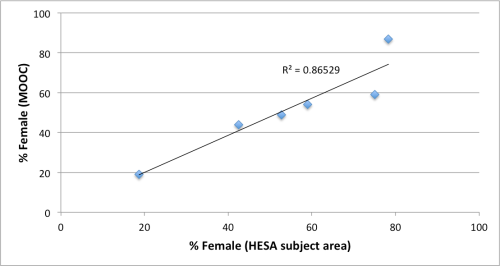 While there is a bit of variation between the two, overall the figures are remarkably similar, so it would suggest that gender differences in MOOC courses do reflect gender differences in traditional courses and subjects (at least, when considering the six courses shown, and comparing to the UK HE sector anyway).